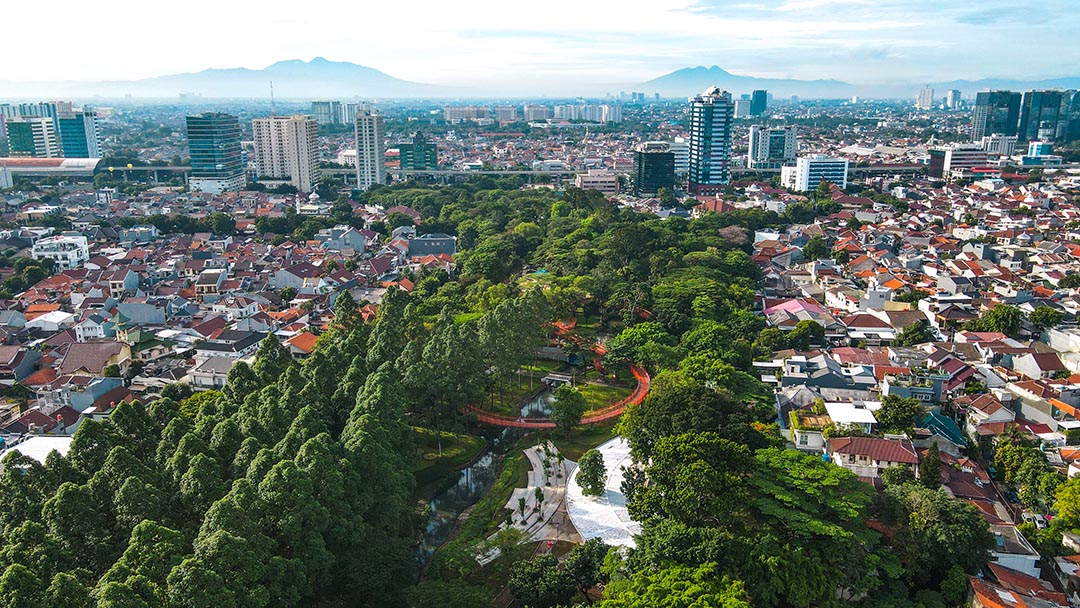 Tebet Eco Park Reminds Us of the Importance of Parks

“Wilderness is not a luxury but necessity of the human spirit.”
Edward Abbey, American author and environmental activist.

When Tebet Eco Park was officiated in April 2022, the people of Jakarta excitedly came to experience the newly renovated public space. It was already a place for people to play, exercise and hang out, but after the face lift, visitors increased significantly due to social media. Indonesia Design (iD) learnt more about the park through separate interviews with SIURA, a landscape design studio, and Studio Sae, an architect who are responsible for the park’s redesign.

The redesign of Tebet Eco Park was a collaboration between Singapore-based SIURA and Bintaro-based Studio Sae. The studios have worked together on a few projects prior to this. For Tebet Eco Park, everything was a result of their discussion, from site planning to landscape design, building design, river naturalisation and the connectivity of all sections, as well as ensuring the technical design adhered to government regulation.

“The brief from DKI Jakarta Park and Forest Service was simple. They wanted to revitalise Tebet Park to accommodate residents’ need for public green space,” said Anton SIURA, the director of SIURA. According to Subiakto, the project director from Studio Sae, “The team from the Park and Forest Service had conducted an FGD [Focus Group Discussions] with people from the area. But we needed to do further research to make it optimum.” This resulted in the project becoming an opportunity to rejuvenate the environment as well, to address the issue of water ecology and connectivity. Initially the name Tebet Eco Garden was proposed, but the governor of DKI Jakarta, Anies Baswedan, suggested a park because he wanted a wider scope.

“The park’s design concept focuses on an active restoration of the site’s ecology with tree conservation and enhancing the blue-green infrastructure. The ecological landscape design approach reduces the risk of flooding with river re-naturalisation,” Anton explained. Public property renovation works can often raise questions about nature preservation. Good news is that existing trees were retained as much as possible and new trees were added to replace those removed due to poor condition. New native shrubs were integrated to enrich the vegetation ecosystem.

Keeping the trees impacted the natural atmosphere as well as the construction design. The park is divided into two sections, the north and south, separated by a busy road. The architects decided to connect both parts via a six metre high bridge for visitors to cross between areas without creating any inconvenience for road users, keeping traffic jams to a minimum. As Subiakto explained: “We didn’t want it to be just a regular bridge. We wanted a bridge that’s interesting and can be used for various activities.” The iconic 280 m long orange bridge takes the shape of the infinity symbol. Named Link Bridge, the concept symbolises sustainability, meaning something that goes on and on with no end, or in other words, infinity. The Link Bridge has become the landmark of Tebet Eco Park, functioning not only as a connector but also a viewing deck because of the elevation. Also, people love taking pictures and videos of the unique feature.

One challenge in building Link Bridge was that the construction should not sacrifice any trees. The original design had more curves but they were reduced to avoid some trees. These are leda trees from the Eucalyptus species with beautiful and colourful bark that grow around the bridge. “Leda trees that grow on the mountains usually have purplish barks, but the ones in Tebet Eco Park are predominately orange colour,” Indira Odityasari, an architectural designer from Studio Sae, explained. The colour of the bridge is inspired by tree bark, while the uneven height of the bridge walls reference tree trunks. The materials used for the bridge – hollow iron for the railing, steel for the structure, concrete wood for the floor and stainless steel for the handle – contrast with the vivid orange.

Another challenge in the renovation was dealing with the existing vegetation and waterway during construction. The design stage started in January 2021 and the construction was completed in April 2022. The solution was to provide a responsive design that works with site context. For example, some paving and felled trees were reused and incorporated into part of the soil bio-engineering material and furniture, and minimised the built area. Local materials and craftsmen were employed to ease the procurement process. These efforts didn’t only save time but also reduced carbon emissions and capitalised on local labour skills and materials.

A people’s park is not complete without a children’s playground. Alvin Praditya, another Studio Sae’s architectural designer involved in the project, explained, “The playground was inspired by a swamp because Tebet area was formerly a swamp land habitat. That’s also why the main feature is based on a swamp animal, a crocodile but made of wood, and children can have an adventure by going into its stomach.” Other play structures are inspired by animal movements like crawling, jumping, hopping, climbing and sliding.

The Wetland Boardwalk, next to the playground is the ecological area, an important asset to the park. A suspension bridge is constructed over the wet area which is a natural system designed to control flood and improve the water quality by using plants that can support water purifying.

Aside from the aforementioned, there are five other zones. The Community Garden is designed for gardening activities for the local community. The Community Lawn is for public activities for small groups, with mounds of grass that act as dividers. Under the Link Bridge along the river there is a space for art installations by local artists as well as benches where people can just relax and enjoy the atmosphere. Forest Buffer is a quieter, relaxed zone where people can walk in the shade. The plants have information plates in front of them, lending an added educational value. The Plaza, located at the main entrance, is a commercial space intended for selling plants as well as food and drink vendors.

Something that needs to be underlined is that Tebet Eco Park provides only a few parking spaces. They didn’t mean for people to come and park their cars, and cause traffic jams. Instead people are expected to come by public transport which encourages health and minimises pollution.

A few weeks after the opening, the number of visitors boomed. Not only people of South Jakarta, there were also visitors from neighbouring areas and out of town. Alongside this was a sudden increase of parked vehicles and street hawkers selling to those enjoying picnics. Things needed to be reordered and Tebet Eco Park was closed for a little while. Now it has opened again with adjustments, like entry bookings via JAKI mobile app, and a temporary fence was installed. “I am still hoping that one day we could have a public park in Jakarta without the hard fence. When this happens, it could mean the provision of good public space has been provided equally throughout the city and people appreciate the importance of taking care of the public facilities,” Anton said.

His hope is shared by many. Tebet Eco Park is more than a space for recreation. It is a place to play, to learn, and to grow; an ecosystem where human and nature can coalesce.