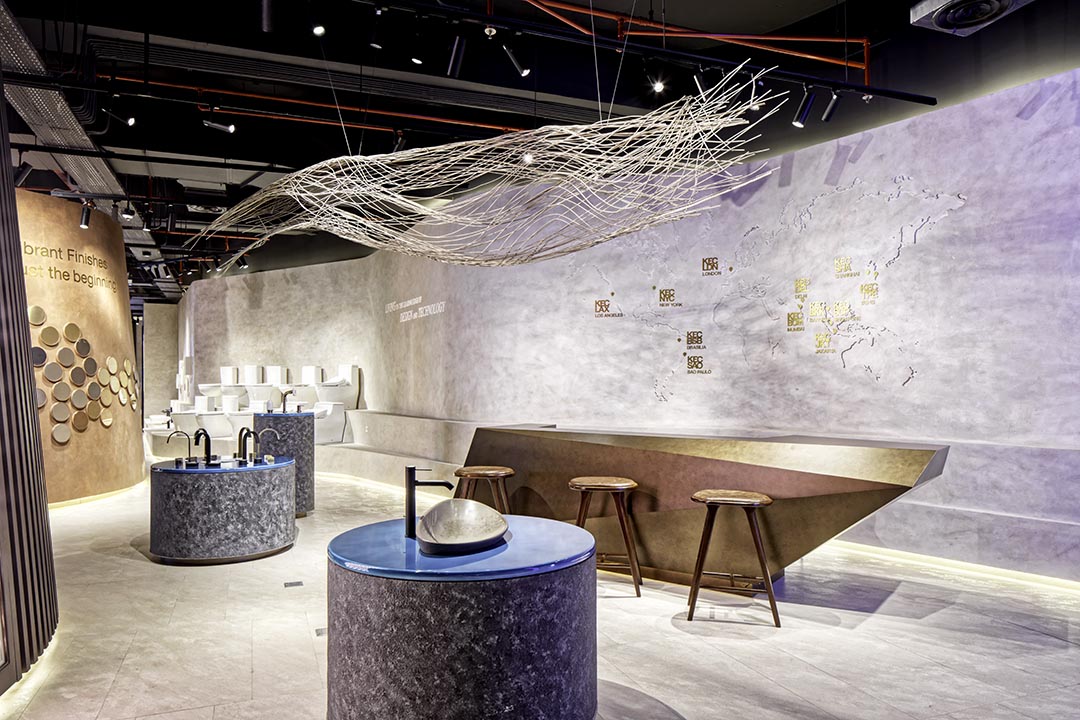 Kohler recently raised the bar for sanitary product showrooms in Indonesia when it opened the Kohler Experience Center (KEC) in Jakarta. Upon entering the venue, you’ll immerse yourself in a whole new experience. Planning a bathroom has never felt so real before.

Kohler was established in 1873 in Kohler, Wisconsin. It is one of the oldest and biggest private companies in the United States with more than 50 manufacturing locations across the world. Their sanitary products are favoured amongst luxury home owners and designers in Indonesia. So, it was good news when KEC Jakarta was launched on 9 August 2022 because now buyers can learn about the products and shop around more comfortably. KEC Jakarta is the 12th KEC in the world with its predecessors being in New York City, Vancouver, Shanghai and Taipei, amongst others. More than a showroom, it does not only display the products but also lets you experience being in a luxury bathroom.

Most of the installations are live, meaning you can actually turn on the showers, faucets, flush the toilets and fill up the bathtubs. The showroom covers an area of 800 sqm and is divided into smaller areas; each with a bathroom setup in different styles and various functions. For example, the Sensory Suite is lets you experience a spa-like space that calms the senses and restores the spirit, while the Family Care Suite offers an integrated bathroom that attends to the specific needs of family members with features designed for safety, and the needs of the elderly, children and others. Some products are displayed playfully, like the art washbasins installed on the walls.

Whether you’re a homeowner or a designer, there is so much inspiration that can be drawn from KEC Jakarta. From the façade to the interior, it is rich with artsy texture, installations, and unique displays. And the amazement doesn’t stop there. Kohler collaborated with three prominent interior designers to design three suites within KEC, each with their own creativity. Here are the stories about the designs.

This suite is based on a narrative whereby a stylish woman walks into her luxury bathroom. She slowly removes her beautiful silk sarong, whilst tiptoeing into a warm bath. The traces of the sarong, (from BINhouse, a renowned batik brand), is carved on the timber floor and glazed with lacquer for durability. Kohler’s state-of-the-art products are installed within the cocoon-like suite. Soft gray stucco walls are spliced with Javanese teak paneling and batik carvings.

The team behind this elegant design is Budiman Hendropurnomo, the founder of DCM Jakarta, Jessica Sandrina Hendropurnomo, Budiman’s daughter and an architect at DCM Jakarta, with Yusman Siswandi, one of the founders of Deya Product & Design. “Jessica and I presented the narrative to Kohler and they immediately agreed. They loved it even more when I said that the walls were going to be carved too. Soon after that, I contacted Yusman and asked him to collaborate with us,” Budiman said. He and Yusman are very close and collaborated on several projects prior to this.

Kohler’s Asia Pacific representative contacted Budiman in 2019 to create a suite in KEC but the whole project was postponed until 2021 due to pandemic. They were given a total freedom on the concept design, the only proviso that it references Nusantara. The original concept went through several changes including the batik on the floor. “We were going to use ceramic but the artisan got Covid-19 and couldn’t go through with it. So, we changed it to solid wood for a stronger 3D effect on the carving,” he explained. It was quite an experiment, because Yusman had never done something like it before. The result is captivating even though Budiman said it was the most challenging part.

The construction process took about six months with each suite working independently, not knowing what the other designers were doing. “I think that was also because we started working on it in the midst of the pandemic where everyone was still keeping a distance from each other,”said Jessica.

Hadiprana Design’s Principal Interior William Patty was invited to KEC in Shanghai in 2019. “It was truly an experience! It didn’t feel like I was in a showroom,” William recalled. Two years later, he was contacted by Kohler’s Asia Pacific representative for a collaboration with KEC in Jakarta. They brief was the Indonesian archipelago and culture. “This was something new to me. We were assigned to design an area of less than 30 sqm, unlike our usual projects that could reach hectares. It’s small but challenging and exciting!” William said.

Hadiprana’s approach was to display Kohler’s products as installation art instead of a real bathroom with the usual flow and placement. They chose products to fit the concept, like sinks with pattern and texture, without the traditional pairing of faucet and mirror. A couple of showers hang from the ceiling, arranged with a couple of lamps.

Three iconic locations in Indonesia underpin the design concept. First, Point Cukul in Bandung, West Java, a terraced slope which echoes the platform for the bathtub and toilet. Majapahit, the Nusantara kingdom that ruled from 13th-16th century was the second. One of the kingdom’s important sites is now in Trowulan, East Java, also known as the terracotta city, which inspired the stacked brick wall behind the bathtub. Lastly, weaving from Sasak community in Lombok is seem through the element of thread used in the interior.

“We didn’t think [the weaving] would be the most challenging part of the construction. We had the thread shipped directly from Lombok and spun it around hundreds of poles manually. I meant to have the thread wrapping around the pole diagonally, but instead it automatically wrapped around in a straight and horizontal manner,” William explained. To prevent excess time and budget on trial and error, their solution was to reduce the number of poles and to wrap them around with thread randomly. “Now the poles have varied thickness from top to bottom, which form sort of a wave if you look at them from across the room,” he said. Hadiprana’s lighting through the suite is dim with adjustable colours to cater to special events held there in the future.

“We named the suite Tirta Kirana because I wanted something rooted from Nusantara and wouldn’t give much possibility for people all over the world to mispronounce it,” William explained. Tirta means water and Kirana means light or something beautiful in Sanskrit. The name describes the suite design perfectly. The translation is ‘a beautiful illuminated bathroom’.

Yuni Jie, the founder of Jie Design is known for her understated elegance, often using neutral colour palettes, warm tones and subtle designs. Yuni described her concept for the Kembang Tanjoeng suite as follows: “A heavenly journey to purification. Letting go and holding on, at one poetic mood. Uncluttered, washed and cleansed. Immersing and easing your mind, body and soul. For a divine sensory pleasure.”

The suite mixes east and west. The Kembang Tanjoeng or tanjung flower pattern is the focal point because it is one of Indonesia’s classic weaving motifs and is timeless. It is a rattan cane webbing system from Kalimantan’s Dayak culture and is widely used on furniture throughout Indonesia. It is unique because its eight angles mimic the tanjung flower. The motif recurs throughout the suite, bringing a subtle Indonesian touch, while highlighting the Kohler bathroom products. Its modernity blends perfectly with weaving.

Yuni also created a contrast between soft and hard using materials: rattan set against an irregular-shaped natural stone wash basin, wooden plank walls and exquisite white marble. All this may sound complicated but somehow a poetic space with rich texture is evoked in a simple and sophisticated way.

It took a year for Yuni to finish this project. While she experienced no significant difficulty in the designing process, the most challenging part was supervising the field work because the construction work started in 2021, not long after the peak of the pandemic.

Like this story, share to your friends
Indonesia Design Dev
Owner
The mission of INDONESIA DESIGN is to interpret and analyze the application of design on various disciplines and to introduce fresh talents and innovative ideas.